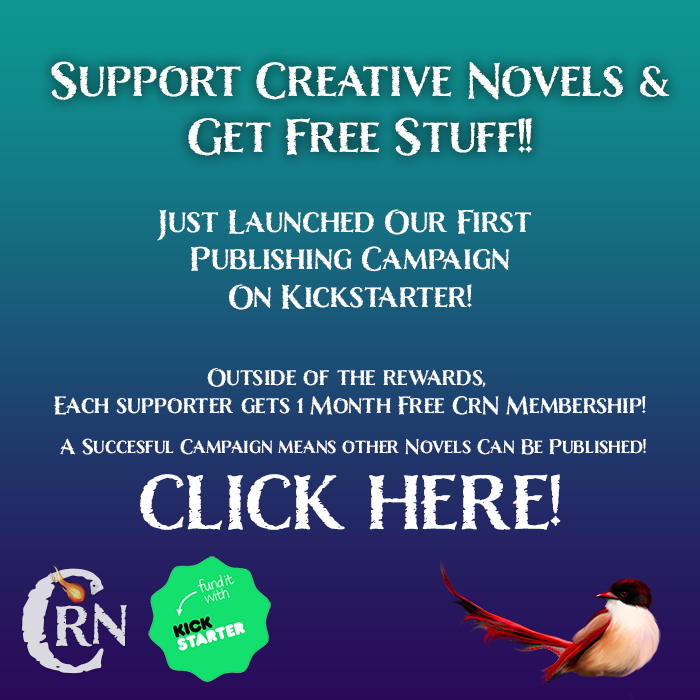 BIG NEWS!!! CrN just launched our first publishing campaign for our contracted novel, Magikind!! Outside of the rewards, every supporter will get a free premium membership at creative novels (just e-mail us, and we'll hook you up)! This means extra CS to unlock chapters!
Please, guys. If this is successful, we can push for other contracted originals and translations to go in print and stores as well and build merch around various projects. We can push to include more authors! Please support the campaign, get the word out, and help us gow!! Thanks

Large eyes stared at smaller ones, one topless guy and one shy girl, both not moving a muscle as they stood there for about five minutes. One looking like Lord Guan, the other as resplendent as a peach blossom, both rooted in place. Su Ke felt his facial muscles begin to twitch, and his heart started to pound beyond its limits. Awkward, ashamed and embarrassed, he wished that a seam would open up in the ground that he could jump in and hide.

His mind was completely blank and he didn’t know what to say.

However, while Su Ke was not moving, Hong Chen finally snapped out of it and her hand shot forward lightning fast to grab the black lace underwear laying on the bed.

Repairing the black lace was Su Ke’s chance to attain a wish as a reward, so he knew what he had to do. A cooked duck cannot fly, so when he saw Hong Chen suddenly move, he followed suit and stretched out his hand.

Both of their hands latched onto the black lace, pulling at it like a tug of war.

Hong Chen was shocked by Su Ke’s movements as she pulled it in her direction and exclaimed, “Give it to me!”

“I accidentally split it, so I have to sew it back up!”

Su Ke could see that his mission was failing right before his eyes, so he naturally went into a dying struggle, pulling it toward him with more strength.

“I split this myself, it had nothing to do with you!” Hong Chen urgently said, her eyes reddening and starting to tear.

Su Ke started babbling nonsense without thinking, “No no, this is a learning opportunity for me, you have to let me learn how to sew clothes!”

Hong Chen couldn’t help but increase her volume as she yelled, “Give it to me!”

It was like both of them were playing tug of war, both pulling in different directions.

“It’s alright, a driver who doesn’t want to be a chef is not a good tailor!”

Su Ke started spouting twisted logic, his mind only thinking of one thing; he must sew up that three-centimeter hole at all costs and complete the mission to receive the reward.

Hong Chen’s voice turned somewhat sharp, momentarily rousing Su Ke from his stupor, “You pervert! If you don’t let go right now, I’m going to give you a reason to be worried!”

He looked up and noticed that she had tears welling up in her eyes, instantly throwing down the item.

Su Ke’s face was bright red as he gave a lame excuse, “I just wanted to help you pack! I don’t know how it happened, but when I picked it up, I accidentally split it!”

Hong Chen wasn’t sure if Su Ke was telling the truth, and after she snatched up the black lace, she immediately stuffed it back into her drawer.

She then picked up the bag of clothes that she dropped on the floor and exclaimed, “Wear this!”

Right after she finished, she stormed out of the room, leaving Su Ke awkwardly standing there.

After changing into clean clothes, Su Ke didn’t dare leave Hong Chen’s room, so he paced around for quite a while. The recent event was really awkward and embarrassing, but Hong Chen didn’t come in to see him.

Just as Su Ke was starting to get over it, he wondered if he should finish up the mission while Hong Chen was elsewhere. He took a few minutes to think about it when he suddenly heard Hong Chen’s voice, “Dinner is ready! I was originally going to cook for you, but I had no choice but to order some food!

With her words, Su Ke opened the door and saw that her facial expression was somewhat unnatural.

Su Ke’s expression was the same as he shifted his feet over to the kitchen.

There were four dishes and a side of soup arranged nicely on the table. They sat down on chairs across from each other and started eating, but the atmosphere was a little depressing.

“Where did you send all the information that you received about the Jin Se Hua Nian? What website?”

Only allowed on Creativenovels.com

Although Su Ke was sitting upright and still, it felt like there was a thorn under his butt, which was extremely uncomfortable.

The only thing he could do was simply answer, “I found the mayor’s and the governor’s mailing address and email address on the internet. I also found the addresses for the Commission of Disciplinary Inspection and the Municipal Commission for Discipline Inspection, and sent them all a copy. “

“En! As long as its importance is made known, the KTV is done for!”

Su Ke nodded his head as he finished his meal and said, “Well, I’ve had enough to eat, so I’ll be leaving first!”

“Why are you in such a hurry, you’ve only eaten a few mouthfuls?”

Hong Chen knew that Su Ke was feeling really embarrassed, but she also felt the same way, thinking about how just moments ago this topless man was holding on to her undergarments.

She suddenly shuddered as she thought, ‘Didn’t that count as indirectly touching her?’

Su Ke quickly decided, “No, my car and schoolbag are with Fang Fei Yi! I have to rush back!”

He then rushed out the door, leaving no room for discussion, and only until he closed Hong Chen’s door did he finally let out a sigh of relief. Patting his chest, he trotted down the stairs.

Only until Su Ke managed to get a cab to Fang Fei Yi’s place, did he realize that it was already almost ten o’ clock.

Right after he entered, he asked Lin Xiao Bai, “Are there any guests upstairs?”

“There’s no one else! Sister Yan is upstairs!”

Lin Xiao Bai then looked at Su Ke’s travel-worn appearance and noticed that he had such skill that he managed to switch to a different set of clothes.

She followed up her answer and said, “I originally wanted to invite Yang Pei Er over for dinner! Once you were gone, everyone else left too!”

Dear Readers. Scrapers have recently been devasting our views. At this rate, the site (creativenovels .com) might...let's just hope it doesn't come to that. If you are reading on a scraper site. Please don't.

He noticed that Lin Xiao Bai seemed to be very interested in his whereabouts, so Su Ke suddenly put his palms together as if he was in prayer, hurriedly begging for forgiveness and running upstairs as he exclaimed, “It’s my treat some other time!”

Even he did not expect the evening to be so eventful; He went with Lin Xiao Bai to rescue Lin Cheng, followed by going with Yang Pei Er to the public security bureau to make a report, and then he was called to the Blue Sky hotel by Ma Meng to talk with Liu Fei Hong for half a day, and finally, going over to Hong Chen’s house to fight a flood.

As he recalled how busy he was today, he felt a burst of helplessness.

When Su Ke made his way upstairs, Luo Fei Yan was lying on the floor with a facemask on.

She immediately stood up when she heard footsteps.

Sure enough, the third floor had no guests, and Luo Fei Yan took advantage of this free time to let her beautician come over and work on her.

Once Luo Fei Yan opened her mouth, her facemask started to wrinkle and crease as she strenuously said, “Oh, you’re back! You can head home now, there’s nothing much for you to do today!”

Su Ke nodded his head in understanding. It seems that today he borrowed the brightness of the facemask, his witch of a boss had apparently become a lot more normal.

“Sister Yan, I’ll be heading out then!”

Once he said so, he went back downstairs.

When he passed by the small supermarket near his house, he noticed that the lights were on, but he did not stop, instead running back home.

Once he was in his bedroom, he let out a relaxing sigh of relief as he set down his school bag.

He threw his body on the bed and subconsciously stuffed his hands in his pockets.

When he pulled them out, there was a black object in his right hand.

It was Hong Chen’s black lace panties, soft and translucent.

The instant he took them out, a special smell wafted through the house.

You May Interesting In

My Youth Began With Him

Back Then I Adored You

The Beautiful Wife Of The Whirlwind Marriage

The Most Loving Marriage In History: Master Mu’s Pampered Wife

The Rest Of My Life Is For You